First lot between the Fuentes and Tartano interchanges

The first section of the SS 38 Morbegno branch is part of a larger project to redevelop the Valtellina plain road network, boosting the only cross-Alpine transport link between upper Lombardy and the South Tyrol; the intervention all lies within the Province of Sondrio and measures a total of 9.6km, most of which (over 5km) is inside a tunnel. The scheme concerns variants to improve on the definitive road, environment and landscaping project as part of a tender entitled “Accessibilità Valtellina. Lotto primo – SS 38 – Variante di Morbegno dallo svincolo di Fuentes allo svincolo del Tartano”. Second Stretch. Characterized by the presence of important architectural works such as the Adda-Bitto Viaduct (290m), the Torchi Bianchi Viaduct (230m – proposed improvement variant) and the Adda Talamona Viaduct (131m), this section ends in a wide junction linking up with the existing SS 38 branch. 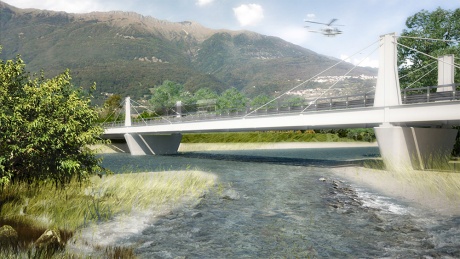 The improvement variants to insert the infrastructure into the surroundings were based on a painstaking analysis of the landscape, which features steep terraced slopes for vine growing and a wide valley within which flows the River Adda; the under-road structure, supporting walls and tunnel openings were therefore designed with details of the highest architectural quality that recall the materials, colours and typical vegetation most commonly found locally. Specifically, the language found for the tunnel openings hinges on an integration of architectural and natural elements through the use of slender juxtaposed elements recalling traditional local features or the colours prevalent locally that gradually blend into the morphology and vegetation of the slopes. Specific solutions were also found to guarantee the use and continuity of major cycle tourism routes along the River Adda. Last but not least, particular attention was paid to the insertion of a road along the valley's northern side into a scenic context characterized by the simultaneous presence of natural woods and rural areas, where the slope has been remodelled over the centuries by terracing and dry stone walls for vine growing. Consequently, from an architectural point of view, the embankment was interpreted as a further element of the traditional morphological alterations of the slopes realized heroically by the Valtellina peoples to cultivate vines, by including a series of terraces with dry stone walls using locally sourced material. The new embankment has therefore been interpreted not as an intrusive element to be mitigated and hidden but as an extraordinary opportunity to recount and evoke a unique local peculiarity, inspired by centuries of mankind cohabiting with the natural surroundings.