Call for tenders to redevelop the façade of Terminal 3

The International Terminal building for the new Rome Aerostation, opened in 1961, owes its architectural, working and structural layout to a happy partnership between the renowned engineer Riccardo Morandi and the architects Zavitteri, Luccichenti and Monaco. The precise design of the pillars and beams echoes the divisions and massive forms of Classical architecture along with details of a refined quality such as the diagonal joints in the post-and-lintel mechanism; this structure is contrasted by generous, fully glazed openings interspersed with slender metal edging. The design solutions found to refurbish the Terminal façade for a public tender sponsored by AdR (Rome airport authority) were based on two close-knit fundamental principles: a desire for restoration and an exploitation of the existing composition with its original formal peculiarities, plus the contextual need to make use of solutions characterized by high levels of technological innovation. Operations to reinterpret certain elements using technological innovation can be seen mostly in the glazed partitions of the façade, carried out to restore full visibility and maximum transparency for the main front using solutions focusing on passenger comfort, while including new features and interesting amenities inspired by “passenger experience” themes. 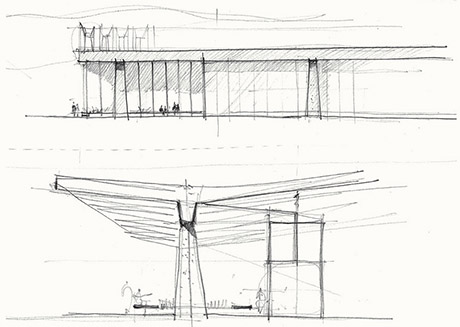 The ultimate consideration in interpreting the site concerned the profound conceptual meaning of “threshold”, seen not merely as the building's physical limit marking the passage between inside and outside, but playing a highly symbolic role of transition and contact between worlds that are different but adjacent and connected. The operation to three-dimensionally open up the threshold is married efficiently with goals of capitalizing on the structure's identifying elements and recovery of the façade's transparency: the glazed elements, created using large monolithic sheets, detach themselves from the vertical plane to line up in appropriate alternations with the angled pillar elements, recreating transitional spaces where outside and inside seem to penetrate one another. The shifting of the revolving entrances to correspond to the pillars, dictated by a need to restore the glazed front's original lightness without the addition of projecting elements, frees up and exploits the pure forms of the load-bearing structure. The present link between Terminal 3 and Terminal B, created in the ’90s to a project by the architect Zavitteri (one of the designers of Terminal 3), has been interpreted as a sophisticated tribute to some of the key works of Riccardo Morandi, which is why the design proposal carefully preserved some formal elements of this solution while working on goals of perceptive and functional enhancement of the internal connecting spaces. In particular, simplification was wrought in the large fountain structure by removing its blank panels and bringing high levels of transparency and luminosity to these spaces, too. Consequently, the refurbishment interventions are based on profound, fresh concepts that aim to identify the building's key values and enhance its extraordinary flexibility allowing, more than 50 years after its creation, to characterize it as an idiosyncratic identifying element of the entire airport facility.